And the winner is...

In the past year, we considered a number of small-ish crossovers, but nothing quite worked out. The failure of Volvo XC40 stung the most — I had big hopes for that car. But it wasn't particularly premium for the money; seats were surprisingly uncomfortable; the no-knob HVAC controls on the touchpad drove the last nail into that coffin. The Subaru Crosstrek (XV) came very close, and I think I would've gotten one if the 6th gear was reasonably tall. Eventually, I had no choice, but shop a size up: above 4000 lbs cut-off, and more than 180" long. Once there, the 2019 Acura RDX and BMW X3 quickly came on top, and I went with the latter because Acura's infotainment is just too weird. 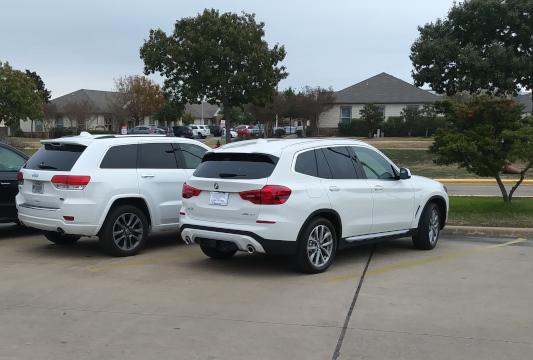 My 2010 Wrangler was the best car I ever owned and almost completely reliable for the 9 years (2 days in the shop total; no break-downs aside from a flat battery once). I test-drove the JL and it is basically the same thing, only improved over JK everywhere they changed. However, the headroom is just as lacking as before. In the JK, I modified the seat rails to lower the seat, but this time around I just don't have the energy. And frankly, I wanted to try something different.

The 2019 X3 is oppressively large, but at least it has the headroom.

1 Wo0t!
Glad to see you found one you were happy with.