Often the owner notices the peening when he starts getting trouble disassembling the gun. The aluminum of the frame deforms into the recoil spring channel and obstructs the guide rod removal. The one in the picture was already filed down crudely, so the image only illustrates the area where peening occurs: 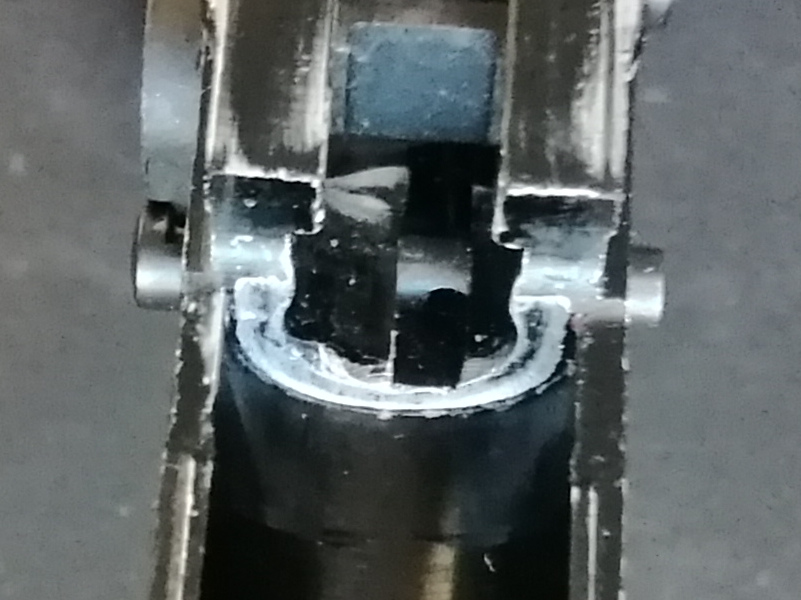 Replace recoil springs before the peening happens. It may be possible to alleviate a problem by running a plastic buffer. Those marketed for 1911 may be modified to fit.

Update: I took a better picture.

1 There's peening, and then there's what happened to this Rexio single-shot break action .22 I got. While the break action was nice and tight, what I didn't realize was that the sucker had been dry fired to the point it was no longer operational. There was damage to the chamber at the rim to the point that you couldn't chamber a round, and the back of the firing pin had been flattened. I cleaned up the metal that had been moved, but even after replacing the firing pin, it still wouldn't work. You could make the pin protrude enough by pressing on the transfer bar, but it wouldn't fire. So I pulled the mechanism apart and discovered the transfer bar had been mashed to death along with the firing pin. Since the manufacturer and the importer are both out of business (The pin came from a similar, but not identical gun, that required minimal machining to fit) a replacement transfer bar is not in the offing. I need to see if I can build up the divots via welding or something. Tricky on such a small part.

2 Are you sure that Eagle is actually out of business? Last I heard, they did a brisk business importing Bersas. Yes, their website is kind of jacked up, but that may not mean much. I'd try to give them a call.

3 The Rexio was imported by "VAM Distribution Co". Eagle has the Comanche, which is what I got the firing pin from. But they denied having anything to do with the other companies, so I can't say for sure if any of the other parts will work, especially since they don't have a .22 version.

4 Yeah, they don't have the transfer bar for the Super Comanche in their parts page.

5 Can you go whole hog on it? Find something that's bigger, yet made from a carbon steel. Anneal it. File it down until it resembles transfer bar. Then, temper and quench using your convection oven and a potato fryer.