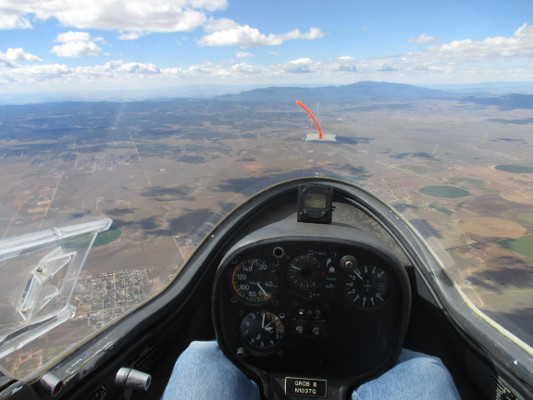 I dabbed in gliders recently, and here's is a couple of observations that I don't see mentioned elsehwere.

It is often said that a winch launch in a glider is the closest thing to a cat shot that a civilian can experience. It turned not quite true. Although I haven't flown off a carrier, I would imagine that a catapult launch is notable for its acceleration. In addition, in modern aircraft the pilot does not even control it until clear of the boat: you can see that he holds special handles on the sides of the cockpit frame. A winch launch, by contrast, is not violent at all.

Where it gets exciting is the need to make prompt, even aggressive, yet correct and measured action if things go wrong.[1] The control has to be correct when things go well too: rotation not too hard, and at the right moment, keeping the speed right in relation of the winch pull, release after going horizontal, and such. You aren't taking a relaxing ride while holding the grab handles.

But there is something that makes a glider pilot work like a fighter pilot, and that is flying in a crowd. A few games exist that make the player to look in directions other than straight ahead. They do it to be more realistic. Fighter pilots have to track positions of other aircraft, while maneuvering, and this is more difficult than it sounds. But pilots of civilian aircraft rarely engage into such activities. Most flying is done with a care for safe separation, and I knew people who would become nervous if another airplane approached closer than 500 ft. For a glider pilot, a several wingspan separation is routine, when gliders start hogging one thermal. And they have to keep head on a swivel just like figher jocks tangling it north of Nellis. Of course I would not want to mention it to them.