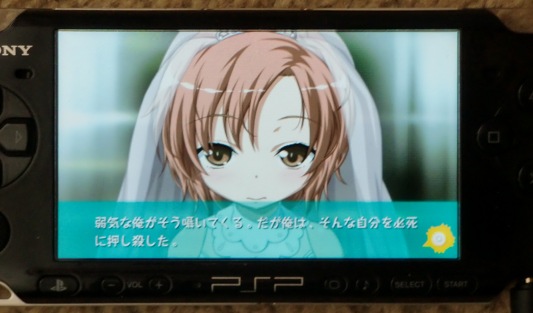 In both anime and game continuities, Yukimura is a crazy girl who manages to convince everyone around her that she is in fact a man, only in drag. Namco trolls decided to outdo themselves on her path. The basic plot is that while Yukimura's charms gradually win over Kodaka, he manages to convince himself that he's gay, which leads to a major disappointment once Yukimura's actual sex is revealed. Ha-ha, very funny. They also troll in the small a lot. For example, in one of choices, 42 incorrect answers fill the scroll space and crowd out the correct one. I was not amused. Don't want to deal with Rika now. She requires hitting a dozen of flags, and all for what?

BTW, I visited a little side path known as "IF", too. Its main premise is that Kodaka saves Yozora's hair. From there on, it's a linear story to a status quo ending. That one was neat.

Unfortunately, when I replayed for "IF", I was not very dilligent hitting items, keywords, and flags, and so I essentially had to restart from the very beginning for Yukimura. Worse, I only found about it when the necessary paths turned out closed. For example, in order not to be thrown to Sister Battle after the reutrn from the island, you must have the keyword "部員の絆" (at the haircut time), but you can only get it if you gather keywords "幸村の連帯感" and "理科の連帯感" (before the voleyball). Each time I had to go back. Documentation was not very helpful. Sure, it's complete, but one has to figure it out. So, instead of making the world a better place, I spent a whole day on going back and forth and puzzling it out.

Todaroda P also required a good deal of puzzling, but it mostly made sense. There I only disagreed with the requirement for complete replays to grab ends. But here it's not a challenge, it's Namco being assholes. Big difference.

P.S. I should mention that the sequence where Yukimura goes full-out Ai yori Aoshi on Kodaka's ass was chuckleworthy, especially since she's nowhere near Aoi Sakiraba in housewife's ability. Naturally, once she breaks another plate, she asks Kodaka to behead her in Seppukku ritual. Alas, no CG!

P.P.S. One of the priceless weaboo parts was how Rika made her big announcement. She said: "Yukimura should not be called `Yukimura-kun', but rather `Yukimura-san'". But wait, didn't we learn from Rocket Girls and other places that -kun is applicable to subordinates regardless? It is far trickier than you ever imagined!

2 One super unpleasant part of the Android revolution is how games are tied to carriers now. I even set up account with AU, it's still no good. Oh well, we still have PSPs. Not for a long though. As far as I know, Toradora Portable is not slated to be downloadable to Vita (and that requires .jp PSN account, of course).