Although the opening post went to Ani-nouto, I am going to make a tradition of overflowing into Meenuvia, where I feel less hamstrung. And so, without further ado, let it be known that I finished both tips of the main fork. 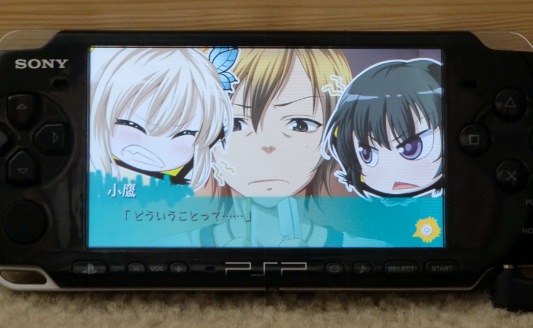 Unfortunately, it required consulting Kampeki-Konryaku. In one of the first dialogs, it is necessary not to make a selection, and let the timer expire. A default is selected in such case, but it is not one of the listed selections and the only way to continue into the bulk of the story. Completely troll move by Namco, in my opinion. 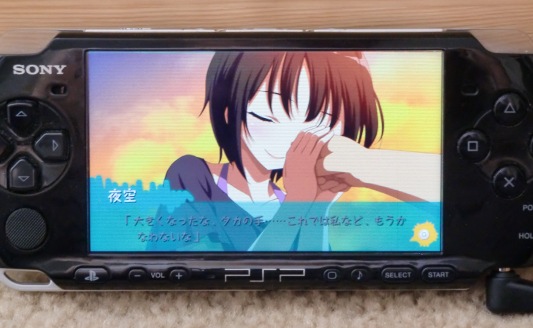 I did Yozora first, and the story was allright, I thought (the CG above is from Sena's path BTW). I was already thinking about comparing it to Toradora P and the ways to explain just what exactly was lacking in the drama. Too early! 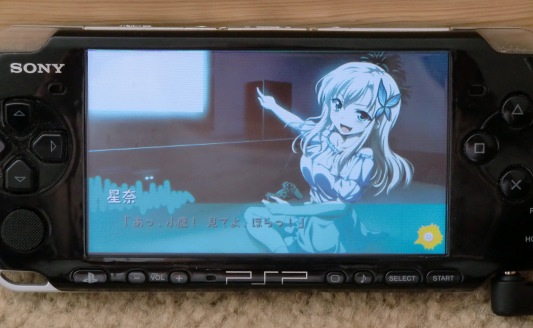 Sena's path felt like a missing opportunity at first, thanks to the confused teenage sex early after fork. It essentially mirrors Yozora's path, and I thought that it made more sense to make them more different. But I changed my mind about it as the story developed.

The reason for that was the right amount excitement and careful consideration for the differences. It was clear that the symmetry was overplayed intentionally, so that one crucial difference stood out: Kodaka and Yozora were childhood friends. So, while they were sorting out their issues on Yozora's path, Sena was generally let to her own devices (even complaining explicitly about being ignored), and while Kodaka had to settle with her, it did not carry much of emotional load. On Sena's path, however, settling with Yozora was a more loaded affair. It was quite effective, in my opinion.

As I mentioned in the opener, Sena is overhelmingly more popular among anime watchers. The game has similar characterizations, and after dealing with the two individually, I have no choice but to concede: Sena is superior. I didn't want to give it to her, since we all love the underdog, and she offers advantages of being rich and, not to put too fine a point at it, buxom. But it is simple, really: Yozora's personality is unpleasant at its core, even when she unwinds and opens up a little. She is not merely strict or traditional, but needlessly rude, tactless, and prone to bullying (even double-dealing in anime, although not in the game). Her cute tsundere act would work much better if there were an actual deredere in it and not just dere relatively to the tsun norm. In contrast, Sena acts kindly by default, unless provoked into yelling, and even then she chills out quickly. When one has to choose with whom to spend a lifetime, there's no contest.

Getting back to Toradora, I think that Ami's True End still offers more to the mature audience, at least more than the main fork of Haganai. The story has more fidelity to my sensibilities, and is properly open-ended. It is more bittersweet than sweet, while Haganai is just "they lived happily ever after, the end". Toradora also offers a "main fork": Taiga/Minorin, and that part seems like a better implementation of the idea, too. For one thing, it's a far bigger struggle, both from the effort the main character had to put in, and from the players effort (especially Minorin). A lot was happening, and there were some interesting moments, like when everyone involved into Taiga's path knew by unspoken agreement what to do (I am talking about Takasu's confession). Granted, Haganai has off-main-fork paths, but even if they are masterpieces of game writing, I really do not care for Rika and Yukimura characters. Too broken. Toradora's Sumire was truly interesting, but nobody here is shining. {Update: Ouch. Rika took her revenge.}.

One positive of Haganai is the BGM. It was properly haunting and involving as necessary, and I kept in enabled throughout.

By the way, Haganai makes a very large progress in sprite animation. Probably nothing new for console players, but still, impressive. Not sure if it added much to the experience, however.